Cesar Azpilicueta admits he was baffled by referee Anthony Taylor’s decision not to eject Sadio Mane for an apparent elbow during the 2-2 button with Liverpool on the pitch. Super Sunday.

Blues captain Azpilicueta was caught with an arm in the head by the Senegalese after just six seconds of the Premier League showdown at Stamford Bridge, but referee Taylor only brandished a yellow card.

The incident was reviewed by VAR Darren England but no further action was deemed appropriate, to Azpilicueta’s disbelief.

“It’s a light red,” Azpilicueta said Sky Sports. “I don’t care if five seconds have elapsed since the start of the match, it’s the first action and it’s bright red.

“He doesn’t want to challenge, he doesn’t see the ball, he just wants to lead with his elbow. I honestly don’t understand that. We recently made these kinds of decisions. The other day we had two penalties where the VAR was not used.

“It was a clear red card and we are making these decisions against us that could change the course of the matches.

They will always say what they think and I understand that we are promoting challenges, but sometimes we see penalties as a joke and other times we see very dangerous actions and they don’t take action.

“We don’t see consistency even within the same match, and for me it’s a clear decision, as this is clear. I saw the replay, but I didn’t need it. It was a light red.”

FREE TO WATCH: Highlights of Chelsea’s draw against Liverpool

Carragher: it is an “orange” card 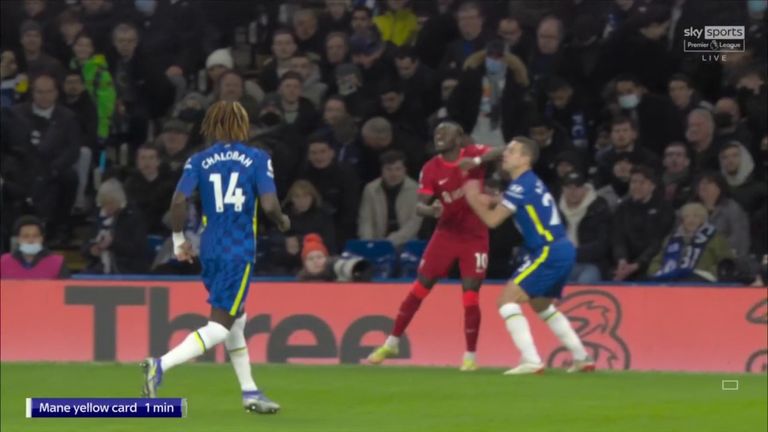 Jamie Carragher said he didn’t think the action deserved the most extreme punishment.

“I think he is one of those who fall into the ‘orange’ category,” said the former Liverpool defender Sky Sports. “After six seconds … if the tip of the elbow hits him instead of the forearm, I think he’s gone.

“It’s one of those that is worse than a yellow, but I don’t think it’s really a red.”

Jimmy Floyd Hasselbaink strongly disagreed with Carragher’s point of view, believing it was an easy decision to expel Mane.

“Are you serious? Do you have a red head or a football head?” he replied. “A footballer knows where an opponent is.

“It’s a red card – forget about six seconds. It goes off with the elbow and is putting the player in danger. The Premier League and PGMOL will come out and provide words to try to justify their decision with an explanation. It’s a red card. . “

“It’s a farewell,” Souness said. “I think you drive with your elbow. It’s dangerous.

Gary Neville said: “The Chelsea manager doesn’t think he should be on the pitch. That’s not much of Mane’s part. It’s been six seconds into the game and maybe that’s what helps him.