The fighting derby launched an extraordinary late comeback to overturn a two-goal deficit and keep Reading on a 2-2 draw on Monday.

Junior Hoilett put the Royals ahead with a stunning curling attempt to mark his first starting start since 2 October (37), before doubling up with a nice close-range shot to put Veljko Paunovic’s men in control (56 ).

The story was far from over, though. Derby assistant Liam Rosenior – in charge in the absence of Wayne Rooney, who skipped the game as a precaution after showing “cold-like symptoms” but returned a negative Covid test – presented Colin Kazim-Richards, who scored. his third goal in three games reduce the deficit (86).

And then in the first minute of injury time of the second half, Curtis Davies rose to meet a cross from Nathan Byrne and power in the all-important equalizer (90 + 1)

The teams remain in the positions started the day after collecting one point each; Reading are 21st with 22 points, with the Derby still at the bottom of the table with 11 points, albeit with 21 games to play.

How the lively Derby saved an unlikely point

Due to a string of postponements, Reading hadn’t played a single minute since December 11, while Rooney had taken his rising team to a 1-0 three-game winning streak and ignited a shred of belief that “The Great Escape” could actually be in progress. .

Clearly refreshed by their forced suspension, the Royals pressed high and tried to direct the ball to Andy Carroll from the start, with the striker denied after 18 minutes when visiting goalkeeper Ryan Allsop produced an excellent diving save to avoid that his header found the bottom left corner.

Derby, meanwhile, has targeted the left flank as a weakness, with Reading right-back Tyrell Ashcroft, 17, making only the third professional appearance of his career. But apart from openings for Luke Plange – who saw a low shot saved and then headed shortly thereafter – and a couple of attempts by Max Bird, Luke Southwood was rarely challenged during the first 45 minutes.

Then, eight minutes before half-time, the hosts took the lead thanks to a magical moment from Hoilett, who took control of a long ball forward, took several precise touches and threw a delicious shot at home. from 20 meters.

It took a resounding stop from Southwood to stop the Rams’ equalizer shortly after the restart. Tom Lawrence had played a clear one-two with Nathan Byrne and had taken a shot on the return pass, with only a strong right hand keeping the ball from crossing the line.

After that pressure spell in the Derby, the hosts doubled their lead. A free-kick from Alen Halilovic was kicked by Tom Holmes to Hoilett, who rushed under pressure to add his second from a tight angle.

Despite the result, the visitors were by far the most dominant and, with just under 80 minutes played, they had enjoyed 80 percent of the ball possession of the second half. All that was missing was a goal, and with a lack of cutting edge, it didn’t seem imminent.

But then, surprisingly, two arrived in two minutes. Kazim-Richards packed the ball after Southwood dropped a cross, before Davies earned a valuable point for the Rams by jumping to meet Byrne’s cross from the right and firing a header at home to knock the fans out. away.

Man of the Match – Curtis Davies 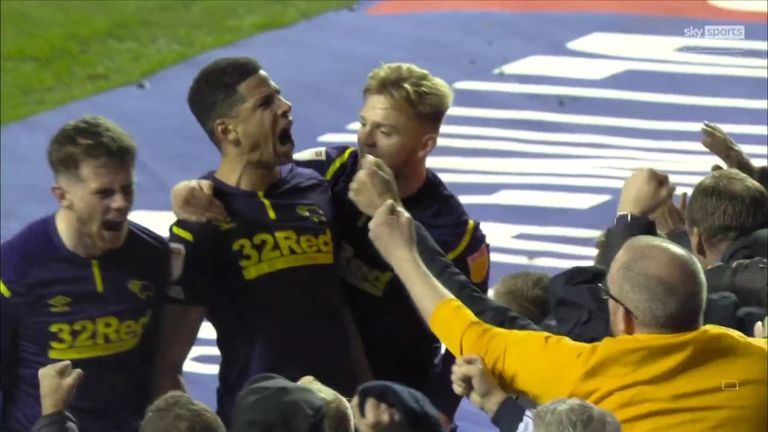 “He defended well throughout the game, but scoring a goal like that in the end is a class. It’s a header that I’m sure we’ll watch over and over again.”

Both teams will take the field on Saturday 8 January, when the third round of the FA Cup begins. The Derby travels to the Coventry Building Society Arena to face Coventry at 12:30, while Reading take on the Kidderminster Harriers of the National League North in Aggborough at 15:00.