Marissa Callaghan does not remember having any sports model during her growth in West Belfast.

Northern Ireland didn’t even start their own senior women’s football team until 2004, when a group of female players decided to pay their own way to represent their country in the Algarve Cup.

The transition to competitive action was extremely challenging. In a bid to qualify for UEFA Euro 2009, Northern Ireland scored just one point from eight games in a group easily won by England.

However, next July, Callaghan will lead the current NI squad in their first appearance in a major final, with the Lionesses among their opponents. She has become exactly the kind of inspirational and recognizable soccer figure that she lacked so much in her youth.

Such a situation might be slightly overwhelming, but the combative flaming-haired midfielder – whose goal in the April play-off second leg against Ukraine did a lot to seal the move to the finals – enjoys the responsibility.

“I take it very seriously,” he says. “When I was little, we had no one to look to in terms of players.

“Yes, you have your family and your friends, but other than that, there was no one for us.

“I was a shy girl growing up – I had no confidence. If you had told me at 15 that I would be here one day talking to Sky Sport, I would have collapsed.”

And to think that next year we will be at the finals of the European Championships in England, it still pinches me to think about it … hopefully we will inspire many boys and girls to want to wear the green jersey.

The Newington Girls, the team she played for as a teenager and then merged into Cliftonville FC, taught her teamwork and tenacity. It is no exaggeration to say that she is now a national hero, but what sets her apart is her determination to help others rise to her level.

“It’s about getting out of your comfort zone and using this platform to help the boys and girls.”

Callaghan can certainly have a moment of reflection or two. For an interview in support of Rainbow Laces, she returned to the Waterworks, the lakeside park area near the Solitude Stadium in Cliftonville, where her footballing history began in earnest, the place where her street skills well-honed have developed into a more structured understanding of the game.

Each year, a youth worker named Marty Foyle encouraged young Callaghan and her friends to play in a soccer tournament at the local Maysfield Leisure Center. “This was the first feeling I had for the competitive side of the game. It was actually Marty who put me in touch with Newington. If it wasn’t for him, I don’t know where I would be.”

Her prowess would take her to Alabama with a football scholarship and then a sports coaching degree from Ulster University. Having previously played for Northern Ireland’s U15, U17 and U19 teams, he made his first team debut in 2010, the same year he landed his first job as a full-time football manager. 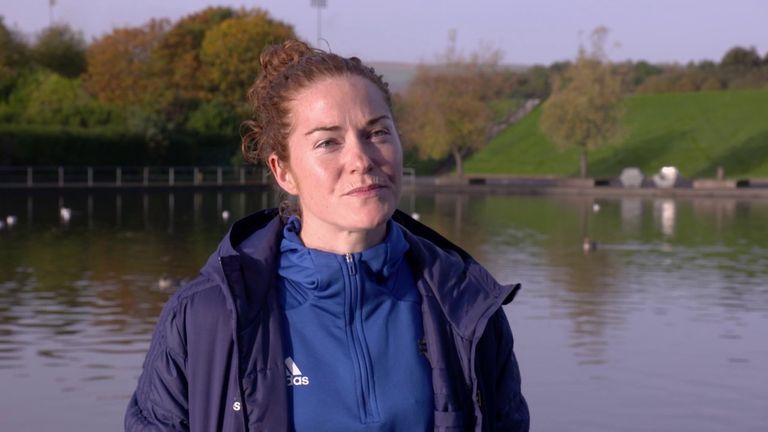 Callaghan says talented players arriving now with Northern Irish women have “huge opportunities” compared to when she was younger.

Callaghan is adamant that some things are simply meant to be, but similar to her offensive instinct in the last third, she feels that it is her passion for the sport that also created those scenarios. Foyle sent her down the football road, and it was also during the game that he met his partner Paula Reed.

“It was just a coincidence. At the time I was doing a program session for work and she was working with the Carnmoney Girls, taking care of the administrative side.

“It wasn’t until a few months later that we met at a Union Street bar and hit it off.”

They have been together for nearly a decade and are proud parents of two-year-old Quinn. Due to Callaghan’s national profile, their relationship has additional significance, in the broader UK context.

“Football helped me understand my feelings”

LGBTQ + rights in Northern Ireland have developed at a slower pace than in England, Scotland and Wales, largely due to the vetoes employed by unionist and socially conservative politicians under the power-sharing agreement in ‘ Assembly of the country.

Equal marriage was only enacted in Northern Ireland in 2020 due to a Westminster directive, six years after it was authorized in other parts of the UK.

In 1998, a survey on social attitudes conducted by two Belfast universities suggested that 58% of people in the province thought same-sex relationships were always wrong, nearly 20% more than the equivalent British survey result. on social attitudes.

However, public opinion in Northern Ireland shifted considerably to this over the next 15 years and by 2013, the figure had dropped from 58% to 27%.

For Callaghan, her teenage years in the late 1990s and early 2000s were a time of confusion.

“There were a lot of things I didn’t really understand when I was younger,” he says.

“A girl who lived near us was gay. As innocent as she was then, my friend ran away from her when she saw her on the street. These little things are what you grew up with. It was seen as bad.

“The hardest time for me was when I was in high school, although I think it’s still a hard time for young people because there are so many things to do. I was lucky enough to have my football to go back to, and all of them. the problems I had, I was able to go and forget them on the pitch. “

Soccer has expanded Callaghan’s group of friends and allowed her to recognize and appreciate the diversity that surrounds her, as well as giving her a much-needed perspective on her own sexuality.

“It didn’t work for me until I started playing for a team, because that’s when I started meeting people who were gay and had relationships. It was just a norm for them.

“I started to understand a lot of the thoughts and feelings I was feeling as I grew up. So from that point on, as I felt comfortable playing football, it became quite easy for me to be who I was.

“However, it was still difficult in terms of that coming out process and the idea of ​​being proud of who you were. It was still something people didn’t understand.

“It wasn’t until my twenties that my family started accepting it, at a time when the wider community was also starting to accept it.”

For the next Marissa Callaghan growing up in or around Belfast, who is also LGBTQ + and hopes someday to fall in love, it’s generally a more welcoming world.

Yet the Northern Irish skipper knows that her visibility as an out athlete is still important. That’s why he will always choose, given the opportunity, to wear the rainbow captain’s armband when on the pitch.

“It’s so important to use that platform so young people can see the colors,” he explains. “Actually I have used it many times in local matches too: I am not the captain of my club team, but I am the deputy, so there are some matches that I lead as captain.

“That bracelet symbolizes so much and to me, if a young man looks at it and feels a little proud of who he is, then it’s huge.”

Popularity starts at home, though. On the night of Northern Ireland’s historic victory over Ukraine, Paula shared a photo of little Quinn reaching out and touching the TV screen showing the match. The image itself was a symbol.

“I just want him to believe that he can be whoever he wants to be – and that he will remember even the little pieces of me I play!

“At the moment, he absolutely loves football. He always kicks in the living room. Sport should show children that anything is possible: work hard, dream big. I want to have those stories for him as he grows up.”

The exciting chapter on the euro is yet to come. First, Callaghan and his Northern Ireland-based teammates will go full-time, allowing them to benefit even more under the leadership of the team of father and son coaches Kenny and Dean Shiels.

Norway will be the first opponent in the final tournament on 7 July, followed by Austria and then the hosts. All group stage matches for the team will be played at St Mary’s in Southampton.

It’s a huge challenge, but one that Callaghan isn’t worried about. “We have so many girls of different ages – a mix of senior and young players – and it works. We want to do so well for Northern Ireland and for each other, for our family, friends and coaches.

“I think we will be in the European finals next year in England, it still pinches me thinking about it. We hope that we will inspire many boys and girls to want to wear the green jersey.

“Northern Ireland may be a small country, but we have a huge heart and we are proud of ourselves.”

Your story of being LGBTQ + or an ally could help make sport everyone’s game – contact us here to discuss further.